Mobilising children to become agents of change for the uplift and betterment of their communities has been the cornerstone of the work of Dehradun’s Mountain Children’s Foundation that has been working with over 40,000 children and about 20,000 families in four of Uttarakhand’s districts since 2003.

Arjita flicks a satisfied glance at the row of saplings of different fruit trees that she has planted outside her home in Ghurhal village on the outskirts of Dehradun. This is the second year in a row that the 13-year-old lass has planted saplings in her village and the forest area adjoining it.

“By planting trees, our environment will be more green and we will get clean air and less pollution,” she states matter-of-factly. “Fruit trees will benefit everyone. The trees we have planted in the jungles will provide food for wild animals which will reduce their attacks on our village.”

Similarly, Aksha Praveen of nearby Kedarawala village has been planting tree saplings for the past two years to save the environment. “This year, I planted two tree saplings of lichi and chiku and I take good care of them to keep them alive,” says 12-year-old Aksha.

The two girls are among hundreds of adolescents across 16 villages in Dehradun district who are making a difference in enhancing the green cover of their surroundings. Children in each village have formed Bal Sangathans (children’s unions) to address issues such as pollution, hygiene and cleanliness, good nutrition and the importance of education.

The Bal Sangathans made ‘hygiene maps’ of their villages indicating how some areas could do better in sanitation. The youth shared their findings with their respective Pradhans (village chief), securing their support for trash removal on public paths.

Aksha is a member of Khushi Bal sangathan in her village. “We have made a ‘hygiene map’ of our village and every month a didi presides over our meeting where we discuss may things to improve our daily lives. We have even done clean-house surveys to improve our surroundings,’ she discloses.

Mobilising children to become agents of change for the uplift and betterment of their communities has been the cornerstone of the work of Dehradun’s Mountain Children’s Foundation (MCF), a Dehradun-based NGO that has been working with over 40,000 children and about 20,000 families in four of Uttarakhand’s districts since 2003.

The idealism and energy of youth is the best antidote to the forces of marginalization, corruption, helplessness and apathy under which most rural communities struggle to survive, states Aditi P Kaur, MCF President. “We tap that energy to help young people create a better world for themselves and all around them. It is nothing less than a revolution in how the people — especially young people — of the mountains perceive themselves and how they address problems in their communities.”

The support of community leaders has given a fresh impetus to and validated the efforts of the youth. Mr Devraj Sharma, Pradhan of Rudrapur village, is all praise for the children who came to him with a proposal to grant them saplings to plant around the village. “The saplings they planted last year are flourishing due to their inspiring efforts. I am thankful that our youth are so responsible about the environment,” he says.

Voice and an opportunity

The Bal sangathans have given children, hitherto unheard, a voice and an opportunity to understand the existing systems and power structures so that they could work as a pressure group to demand inclusive and quality education for all. The sangathans also became a place to hold open and healthy discussions to change attitudes towards gender discrimination.

Akash Tomar, now in his twenties, was among the first boys to fight the gender divide in his village Dhood way back in 2016. With the help of other boys and girls in his Bal sangathan, he secured the return of several girls to school after they were forced to drop out by their parents. He also helped in constructing a toilet in the local school.

On the personal front, Akash realized that if he didn’t help with the household chores the burden of responsibility would fall on his young sister. “If I hadn’t helped around the house, a majority of the burden would have fallen on my sister and she wouldn’t have been able to attend school,” he remembers.

“We saw a great improvement in communities, once un-invested or unaware of the importance of education, now taking an active interest in school for their children after interacting with the sangathans,” reveals Kaur.  “A total of 555 Children who had dropped out of school returned to school because of parental support and encouragement.”

“The years of interacting with these children have taught an important lesson ~ that working with children delivers results because people listen to and are motivated by their children in a way that cannot be touched by any outsider,” observes Kaur. “Children are both a catalyst for change and a force that brings people together.” 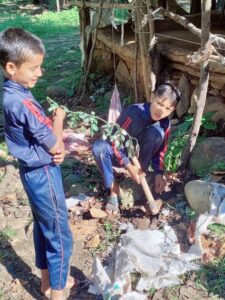 The Prime Minister said, today’s government is the government...
India

Prime Minister Modi touched on the history of water...
Bangladesh

Many of the new jobless people are women, a...
Bangladesh