Can men contribute to women’s empowerment?

Can men contribute to women’s empowerment?

Women’s development and gender equality have been important elements of the global development agenda since the international women’s year in 1975. Over the years many laws and policies have been introduced in India and there have been significant improvements the status of women and girls. However, gender-based discrimination is still widespread. According to the gender inequality index, India was ranked 127 out of 160 countries of the world in 2018. Women’s empowerment is at the centre of achieving gender equality. But what is the role of men? This issue remains unaddressed.

Gender equality is about relationships within society. Patriarchy is a commonly used term to indicate the existing situation where women and men have specific roles and responsibilities in society. Women are expected to manage the home, while men are expected to be providers and usually have more roles outside the home. These roles are however changing. Women are now increasingly joining the workforce, are seen in public spaces and men are also challenging themselves with domestic tasks like cooking. But somehow most domestic chores remain the responsibility of women with men playing a secondary role at best. Similarly, it is often seen that among working couples’, women leave their careers to raise the children while men continue their professional journey. Despite many improvements, women’s literacy still lags that of men, the sex ratio indicates that less girls are born or survive and violence against women in different forms continues to be common and are often reported in the press.

Several efforts are ongoing in India to explore how men and boys can become partners within the larger frame of gender equality in society. In one instance, men’s groups formed in rural areas in the states of Uttar Pradesh, Madhya Pradesh, Rajasthan, Jharkhand, Uttarakhand and West Bengal. In some places boys’ groups were also formed. The men in these groups were trained to recognize the differences in the circumstances around the lives of women and men and girls and boys. They understood how existing social norms created compulsions or provided opportunities in our lives. The men realized how they themselves became agents of these conditions which created more barriers for women and girls they loved and cherished like their wives, daughters, mothers, and sisters. They also understood how these societal compulsions created pressures for men and boys to behave in certain ways. They could express anger and violence, but the same rules limited their expressions of care, concern, or love. They understood the value of a family and a society where all could aspire and get opportunities as well as support to achieve their best.

Several interesting changes have been noted among the men in these communities. It has been observed from programmes implemented in several states of India over two decades now, that community level interventions provide very important insights about the process of change towards gender equality. In all places men had started performing many domestic chores like cooking, cleaning, bringing water, firewood, washing clothes and utensils, and so on. Fathers had become very engaged and active in the care of their infants and young children. In several places men started taking on more contraceptive responsibility, usually seen as a women’s burden, by using condoms regularly and an increase in the overall usage of contraceptives was observed. 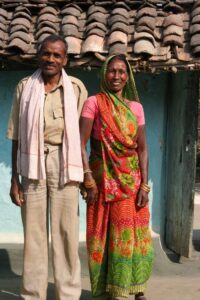 In Maharashtra, it was noted that many families went in for joint registration of their residence. Women in Madhya Pradesh said that their husbands were now providing much more care during their pregnancy and after delivery than they had done in earlier pregnancies. In West Bengal women who earlier found it difficult managing domestic chores and small income generation work reported that they were now earning much more as a family as the men not only took care of some of the domestic work, but also contributed to the home-based income generation work. Youth in Rajasthan and Madhya Pradesh got together to ensure that the education of young girls could continue and campaigned successfully against early marriage. In Maharashtra, men’s groups supported women panchayat leaders to effectively play their leadership roles. In Uttar Pradesh men supported women to join employment programmes like the MNREGA. In all these places women said that they now felt more respected, included in family decision making processes and reported that their relationship with their spouse had improved. They also reported that their mobility had increased – they could go out to earn and they also decided how they would spend their money. Some women also indicated better trust, communication, and affection between spouses.

The pandemic has forced many changes in the lives of people through several rounds of lockdown and other restrictions. It is understood that as pressures and constraints increased within a family in lockdown, women have been facing many additional challenges. There have been many reports of increasing violence against women and forced and early marriage from many places.

Early in the lockdown, social media groups were developed and connected with members of the men’s groups around the country to build their confidence on how best to approach this crisis. They were encouraged to the reach of social media to build local support networks, identify families in need of any help and link them to public services. The men’s groups were also asked to monitor cases of violence against women and other forms of gender discrimination in their communities. Around 7,000 such members of men’s groups in over 500 villages in these states were connected in this process.

Actions of about 2,000 among them from over 133 villages in 27 districts in the three states of Uttar Pradesh, Uttarakhand and Madhya Pradesh were tracked. Findings from the information compiled showed that these men were individually and collectively taking many steps to deal with the different problems that were emerging every day in their communities. They met ASHA and Anganwadi workers to enquire whether they needed any support and when necessary, joined in the COVID-19 prevention campaigns. They connected with the panchayat leaders and ration shop owners to facilitate delivery of rations. They helped women to get MNREGA job cards, assisted pregnant women to get necessary health care services, supported women to file complaints on cases of violence faced by them and several other cases. In a short period of three months in 2020, these men had helped over 400 women in different ways in these villages. Many cases were also referred to the district and state authorities for further actions.

A nation-wide study was conducted in 2020-2021 to understand how other organisations who were involving men and boys in their work around gender equality perceived the effectiveness of this approach. Over 65 organisations in 15 states were included in the study and an overwhelming majority found that involving men and boys improved the effectiveness of their interventions. The results they had achieved were very similar to the results that CHSJ had seen in its own work. The study also provided some additional insights. Work with men and boys is most effective after work on women’s empowerment had already been started in the area earlier. This created a fertile ground for change because women welcomed the change. Younger men were more ready to accept change. However, this study also noted that organisations found it more difficult to approach and work with men compared to women. Men were hesitant to meet in public, they also needed more encouragement appreciation to continue.

A consensus is emerging that work with men and boys is extremely important to strengthen work on women’s empowerment. This approach provides clear examples how gender relations can shift in the family and community levels as well as in public institutions within a framework of collaboration. It also provides men an opportunity to understand how social norms get shaped and how they are themselves affected by these gendered social norms. As we move towards the Sustainable Development Goals this approach can be integrated into work on women’s empowerment, violence prevention, empowerment of adolescent girls as well as child rights protection. Hopefully by providing men and boys a very positive role in achieving the larger social goals, we can achieve more lasting results.

Vaccination after infection with SARS-CoV-2, the virus responsible for COVID-19, is associated with a decrease in the likelihood of...

“It’s very necessary because the leaders, the decision-makers, sometimes forget, sometimes neglect what they promised. They need to be...

The pandemic recession broke a pattern observed in similar crises – the impact on women was disproportionately higher than...

Pollution is the world's largest environmental risk factor for disease and premature deaths, according to the Lancet commission on...
- Advertisement -

According to a report launched at United Nations Convention to Combat Desertification COP15, presumed drylands are under threat from...

From Child Laborer to Activist, Tara Banjara Asks World to Pledge to End the Scourge of Child Labour

Tara Banjara, rescued from her life of a child labour at the age of eight years, questions whether children...

Vaccination after infection with SARS-CoV-2, the virus responsible for...

“It’s very necessary because the leaders, the decision-makers, sometimes...
- Advertisement -

“It’s very necessary because the leaders, the decision-makers, sometimes...
Children

The pandemic recession broke a pattern observed in similar...
Air

From Child Laborer to Activist, Tara Banjara Asks World to Pledge to End the Scourge of Child Labour

Tara Banjara, rescued from her life of a child...
Food sovereignty

The campaigners point out to initiatives by civil society...
Climate change

The ongoing session of the Conference of Parties (COP15)...
Bangladesh

Study Shows The Poor Simply Lack Opportunities To Gain Wealth, But A One-Time Boost Can Make A Major Difference

The current study estimates that the economic misallocation resulting from the...