Many of the new jobless people are women, a large number of whom lost their jobs due to their failure to adapt to technology as they were not given the opportunity for education.

The high levels of economic growth in Bangladesh in recent years has really not provided the desired level of employment, economists said at a panel discussion in Dhaka on Sunday.

Economists spoke of the high unemployment rate in the country – a level of unemployment that did not match the high growth and underlined the need to ensure employment-oriented growth to achieve desired levels of sustainable economic development.

“The country has been on a path of high growth, but unfortunately this growth has not been accompanied by job creation and employment generation,” said Fahmida Khatun, executive director of the Centre For Policy Dialogue who was participating at the panel discussion organised by the German Embassy.

The youth unemployment rate is an alarming 10.6 per cent, she said, juxtaposing the unemployment levels against the much-spoken of Bangladesh growth story.

“One factor we have to remember is that not everyone will be able to get a job,” she said while emphasising the importance of providing access to finance to the right person. “So maybe they have to create their own jobs, meaning that they have to be self-employed,” she said.

She opined that unemployed young people need to be entrepreneurs, and to start their own business they need access to finance, which is a difficult task. Yet, there was an opinion that not everyone can be expected to be enterprising, leaving many to join the queue of the jobless. This could fuel anxiety among youth, and possibly, even unrest.

Besides, automation that came in with the high growth too created a new pool of the jobless, Fahmida Khatun said, urging the government to ensure jobs for those who lost they jobs in the wake of automation in the industry they worked in.

Many of these new jobless people were women, a large number of whom lost their jobs due to their failure to adapt to technology as they were not given the opportunity for education, she said, emphasising on the need to provide skills development training to women who have traditionally been left behind when it comes to adaptation to science and technology. 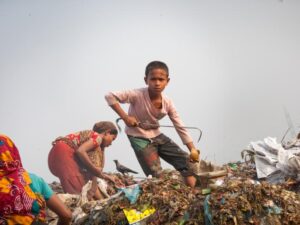 MA Razzaque of Dhaka’s Policy Research Institute spoke of the need for further support from the European Union in the country’s drive to achieve middle income status, especially in the context of extending the GSP plus facilities to Bangladesh.

The ‘zero duty’ access to the EU enjoyed by Bangladeshi exporters will continue for three years after the official announcement of ‘developing country’. The country’s exports could attract an average 8.7 per cent export duties if it fails to qualify for the preferences under ‘Everything But Arms’ (EBA) provisions of the EU. It is also estimated that shipments would drop at the rate of 5.7 per cent per year. Bangladesh needs to qualify for the Sustainable Development and Good Governance’ for ‘vulnerable developing countries’ or the GSP+ scheme in order to preserve its competitiveness in the export market and mitigate these effects.

To qualify for GSP+ Bangladesh will need to ratify 27 international conventions and fulfil the EU’s ‘vulnerability’ criteria. Bangladesh’s existing labour laws, the employment of child labour, registration of trade unions, elimination of backlog in cases of labour laws are stumbling blocks in the way to the country qualifying for GSP+.

He recalled the preconditions associated with the EU’s GSP Plus facilities to be offered in the post-graduation era and stated that Germany and other EU countries can assist Bangladesh in meeting such conditions as increasing reliance on green energy.

“All countries in the world are now confronted with certain challenges. Trade growth has slowed and the global economy is going down,” he said noting the challenges ahead of the country.

Image: Hippopx, licensed to use under Creative Commons Zero – CC0.

Eminent citizens from all walks of life feel that...
Clean tech

The Montreal Protocol — designed to save the ozone...
Accountability

With time running out, the meeting in Egypt will...
Bangladesh