Southern Rice Black-Streaked Dwarf Virus, which was first discovered in China, has been detected in North India’s main rice-producing states and officials fear that up to seven per cent of the crop could be lost. The virus is affecting India’s famed, aromatic basmati rice.

The virus — transmitted by the white-backed planthopper (Sogatella furcifera) when it sucks on the sap of young plants — interferes with root development and plant growth.

Detected in Guangdong Province in 2001, the disease was confined to China for the next few years before spreading to other countries such as Vietnam and Japan. A research paper shows that it can cause a 30 to 50 per cent reduction in rice yields.

The Indian government fears that the outbreak might add to losses caused by erratic southwest monsoon rainfalls. The area under paddy cultivation has been six per cent lower this August compared to the same period last year. Rice accounts for 40 per cent of India’s total food grain basket.

“Laboratory analysis showed the presence of virus in both the infected young plants and the body of the vector after the RNA was isolated,” Rajbir Singh, director, Agricultural Technology Application Research Institute, Ludhiana, Punjab told SciDev.Net.

However, the virus was not found in the infected plant’s seeds and grains, said Singh, who heads an eight-member committee of experts formed 22 August by the Ministry of Agriculture and Farmers’ Welfare to assess the extent and severity of the disease. The team visited the 24 fields located in the three worst affected states of Punjab, Haryana and Uttarakhand. 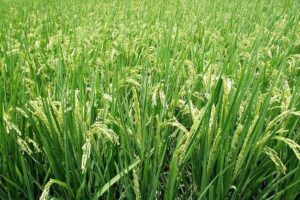 Collected samples sequenced in the laboratory showed the virus’s association with stunting symptoms. The team found that between two and ten per cent of rice plants were affected although in some fields the rate of infection was as high as 50 per cent.

Farmers have been advised not to flood their paddies with water and to monitor the plants for the presence of the vector on a weekly basis. They have also been asked to remove weeds and avoid the indiscriminate use of pesticides and fertilisers.

When large numbers of the insect pests are spotted, pesticides such as triflumezopyrim, dinotefuran or pymetrozine may be sprayed at the base of affected rice stalks, officials say.

The virus was found to be affecting both basmati (aromatic) and non-basmati varieties of rice. Investigations are underway to discover how the virus arrived in India and how it works against rice plants.

“Currently, we assume that the vector is ‘long-range migratory’ in nature, which would probably come through human routes,” said Gopala Krishanan, principal scientist at the Indian Agriculture Research Institute, India’s premier agriculture research institution. “We are trying to decode the whole mechanism of the spread of the virus.”

While it is known that infected paddy plants die, hitting crop production, neither officials nor scientists are ready to estimate the extent of possible loss.

“Loss is certain, but we have no figures yet — it is still under monitoring and assessment,” said a scientist and member of the investigating committee, asking not to be named.

Rice traders, however, expect that the virus could substantially cut crop production in Punjab and Haryana, often called the rice granaries of India. “Our assessment shows that the production of rice can be reduced by as much as seven per cent,” said Ashok Kumar Gupta, vice-president of Haryana Rice Millers Association.

This piece has been sourced from SciDev.Net

Image: Hippopx, licensed to use under Creative Commons Zero – CC0

Authors of the report say that every two seconds, one person under the age of 70 dies of a...

From melting glaciers to a ‘monster’ monsoon, record-breaking floods have left a third of Pakistan currently under water and...

Millions of workers remain unpaid for their work for several months. Despite over Rs. 21,000 crores of pending wages,...

If signed into law, the bill will grant citizenship rights to thousands of people, mostly of Indian origin. How...

The death of a young woman in the custody of Iran’s ‘morality police’ has led to protests across the...

Authors of the report say that every two seconds,...

From melting glaciers to a ‘monster’ monsoon, record-breaking floods...
- Advertisement -

Authors of the report say that every two seconds,...
Accountability

Millions of workers remain unpaid for their work for...
Accountability

The expert presented a grim assessment of 1.3 million...
Democracy

If signed into law, the bill will grant citizenship...
Democracy

If signed into law, the bill will grant citizenship...
Health Policy

Authors of the report say that every two seconds,...
Global Governance

The Mineral Inheritors Rights Association, has voiced concern over...

Not Just Humans, Climate Change Has Made Plants Vulnerable as Well