The campaigners point out to initiatives by civil society groups in Jharkhand demonstrating effective ways of dealing with nutrition holistically. They say that local, diverse foods, including uncultivated forest foods and traditional crops and varieties play a key role to secure nutrition.

A report by a fact-finding team has raised serious concerns with regard to indiscriminate distribution of fortified rice to poor households, Anganwadis and schools in Jharkhand.

The ground-level report follows a three-day study undertaken by the Right To Food Campaign (RTFC) and the Alliance for Sustainable and Holistic Agriculture (ASHA-Kisan Swaraj) in villages in the state.

Their report stresses that high levels of anaemia coexist with various blood disorders like thalassemia and sickle cell anaemia among a significant proportion of Adivasi population in Jharkhand and fortified iron is no solution to the anaemia among this population. The report points out that even the FSSAI regulations on fortified foods recommends people with thalassemia to consume iron-fortified food under medical supervision. It further warns sickle cell anaemia patients not to consume iron-fortified food.

“On the one hand, the government understands the health risks of consumption of iron fortified food for many people with particular health conditions in our society, and brings in regulations like this. On the other hand, the government itself is distributing such rice in all its food schemes where the poor have no option but to depend on this entitlement for their food security. What is more, in Jharkhand due to lack of population-based screening, people with these health conditions may not know that they have these blood disorders; further, the government is also distributing such rice without any proper information to, or dialogue with the communities”, the fact finding team pointed out in its report. 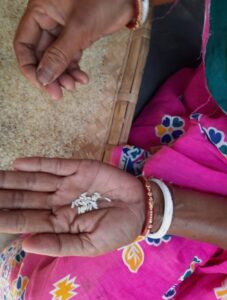 Not a proven approach

Field visits also showed that many people do not prefer consuming this rice and are even separating and removing the fortified rice kernels before cooking and consuming the rice.

The fact-finding team visited five Panchayats in Khunti and East Singhbhum districts where they met an array of people and officials as well as with the Jamshedpur East MLA, Saryu Roy and Chakuliya MLA, Samir Mohanty. Team members also interacted with concerned district and state level officials, and also met with Cabinet Minister Dr Rameshwar Oraon.

“Fortified rice is not a proven approach to tackle anaemia effectively, as per published papers and reviews. It is surprising that the Government of India, in a hasty blanket approach, has already scaled up distribution of fortified rice to 257 districts across India, even though the so-called ‘pilots’ have not completed three years from the time initiated, nor evaluated, nor findings put out in the public domain,” they say in their report.

They point out that official data on the government portal shows fortified rice being distributed in two blocks of East Singhbhum (the designated Pilot district in the state) only from October 2021. However, they say, fortified rice has already been taken to several other districts without any data being shared on the portal. “What is the meaning or purpose of the pilot then,” they question.

The report calls for implementation of proven, holistic, safe and community-controlled approaches to tackle anaemia and other malnourishment conditions. “Dietary diversity is an important approach and cannot be given the short shrift due to hasty adoption and attention to risky unproven approaches like food fortification,” their report says.

The campaigners point out to initiatives by civil society groups in Jharkhand demonstrating effective ways of dealing with nutrition holistically and say that local, diverse foods (including uncultivated forest foods and traditional crops and varieties) play a key role, along with participatory learning in these community-led approaches.

“The government has to expand its food security basket to include millets, pulses, eggs, cooking oil and milk in the food schemes. Nutrition Gardens should be scaled up along with support to extensive livestock systems that provide nutrition as well as support livelihoods,” they say, adding that this needs to be complemented with a well-managed micronutrient supplementation programme.”

Groundbreaking new guidelines on handling biological hazards in the workplace have been agreed by experts representing governments and employers’...

Global mean sea level reached a new record high in 2021, after increasing at an average 4.5 mm per...

Presently, PACS account for 41 per cent or over 3 crore farmers of the kisan credit card loans given...
- Advertisement -

Human Rights Defenders Write to Guterres; Say Next OHCHR Must be a Rights Champion

The post of High Commissioner should be filled by someone of high moral standing and personal integrity, and who...

Since the United States typically only cooperates with the International Criminal Court when conditions suits it, the genocide declaration...

Groundbreaking new guidelines on handling biological hazards in the...

Training was provided in five fields – electrical and...
Accountability

Presently, PACS account for 41 per cent or over...
Accountability

Current crises are exposing the inadequacies of the international...
Governance

Nuclear-Armed Powers Squander $156.000 Every Minute on Their ‘MAD’ Policy

The US spent a whopping $44.2 billion on nuclear...
E-governance

The plan is to wean countries and governments away...